How is it that Kit Kats are one of the most viral snacks to come out of Japan when they're not even originally Japanese? Nestle Japan has raised the humble chocolate-covered wafer to an entirely new level. The nearly endless stream of new and unique flavors means a new Kit Kat craze is happening at least once a year. They have seasonal flavors coming out four times a year, regionally exclusive varieties that can only be bought from certain prefectures, brand partnership flavors, seriously, it doesn't end!

With so many Kit Kats on the market, I tried to get my hands on as many as possible for the sake of this series of reviews. Maybe I'm a skeptic, but let's face it, they can't all be delicious, can they? I mean, come on, Cough Drop flavor? But if you're like me, you'll want to try it anyway just to say you did.

Since we'll be going down quite a rabbit hole with these Kit Kats, I've divided my reviews into different parts. Today, I'll be tasting and reviewing matcha Kit Kats.

Yes, matcha gets its own category because Nestle made THAT many of them. Not gonna lie, it gets kind of difficult to find different words to describe the same flavor so many times, so I'm going to organize this by degrees of strength, from weakest matcha flavor to strongest. 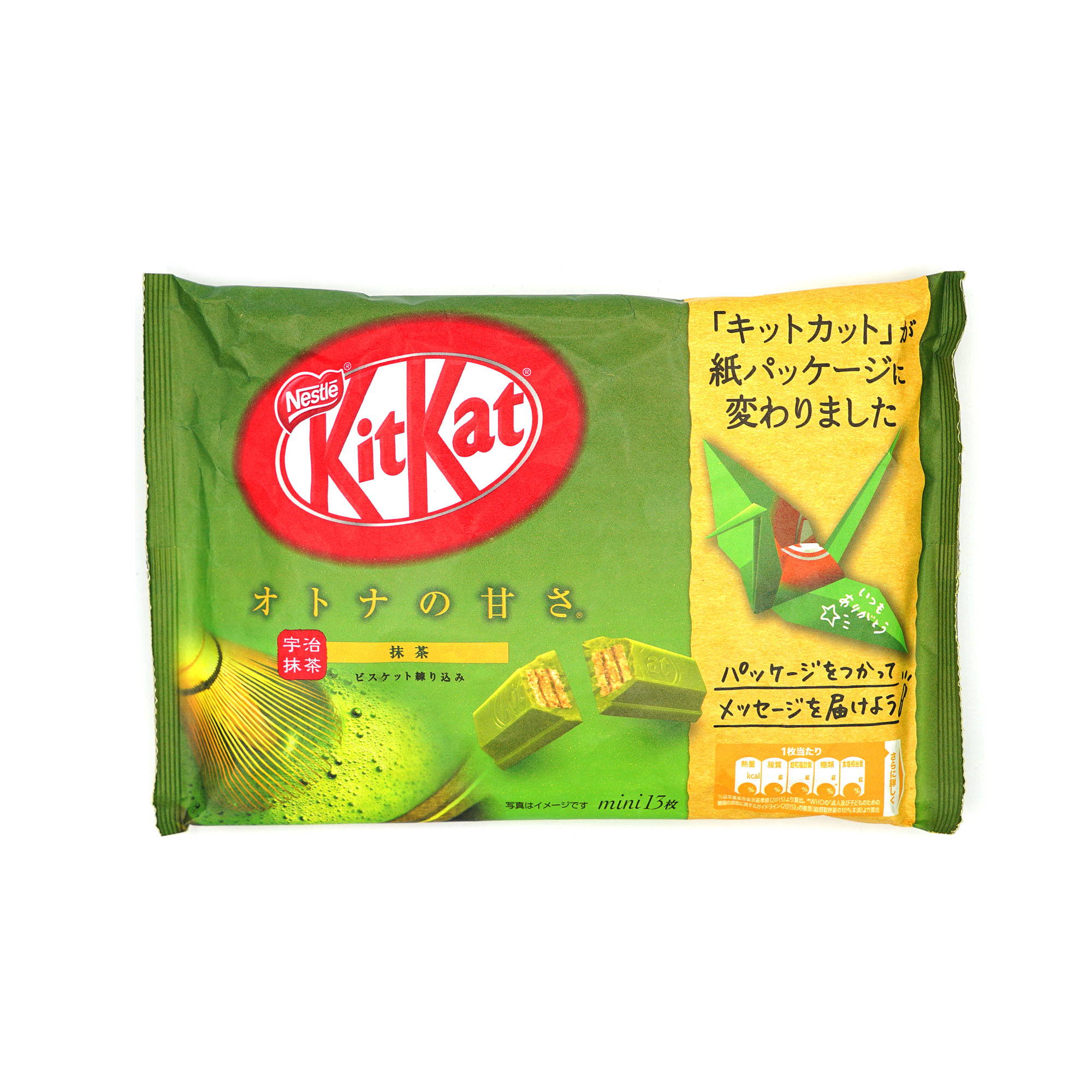 Ground Uji Gyokuro tea leaves are infused into the chocolate batter and add an aromatic bitterness to this incredibly addictive green tea Kit Kat. It's the lightest in my matcha Kit Kat spectrum. 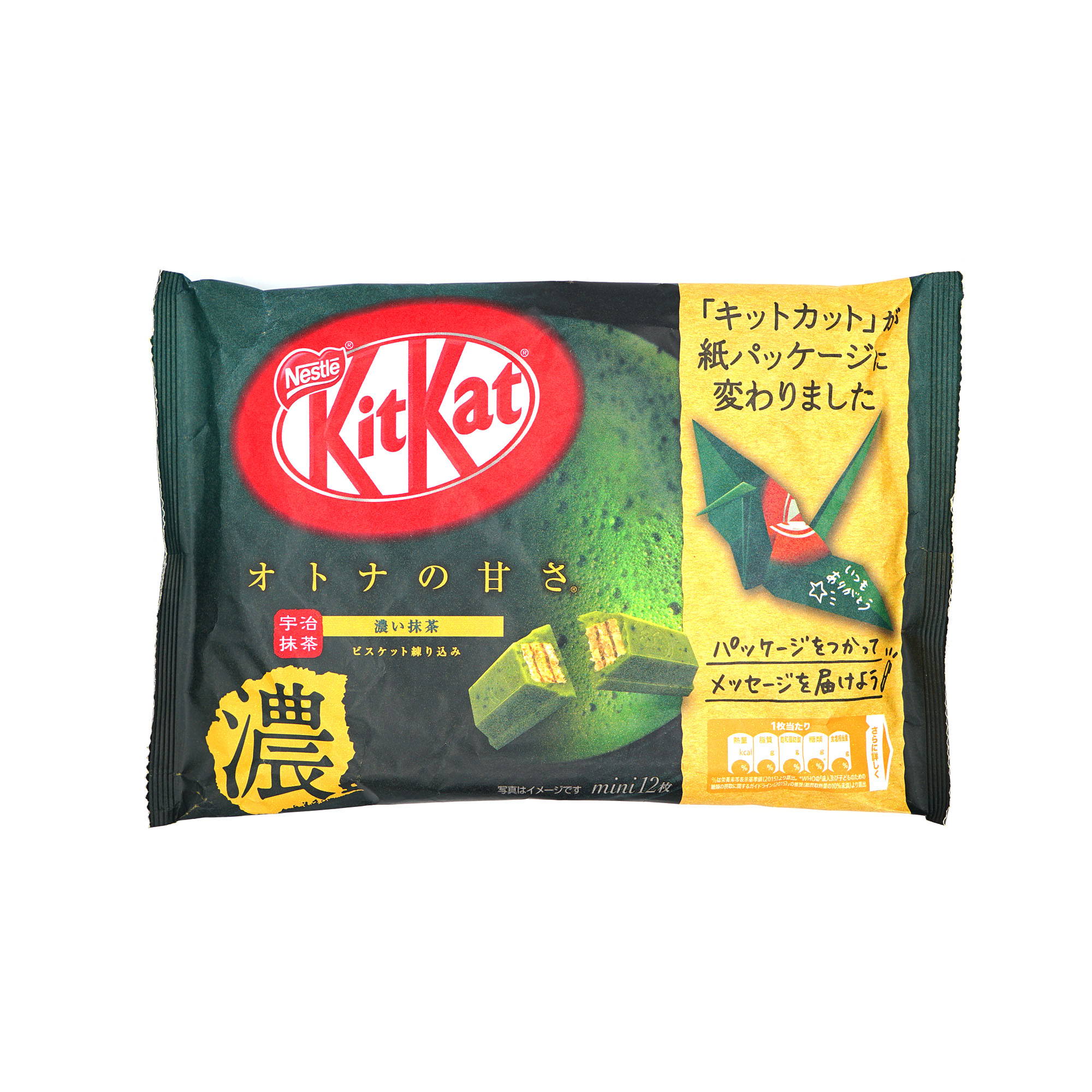 This Kit Kat infused with matcha has more complexity of flavor than the Otona no Amasa Matcha and has a noticeably darker color, but is sweeter than the Matcha Leaves Kit Kat. 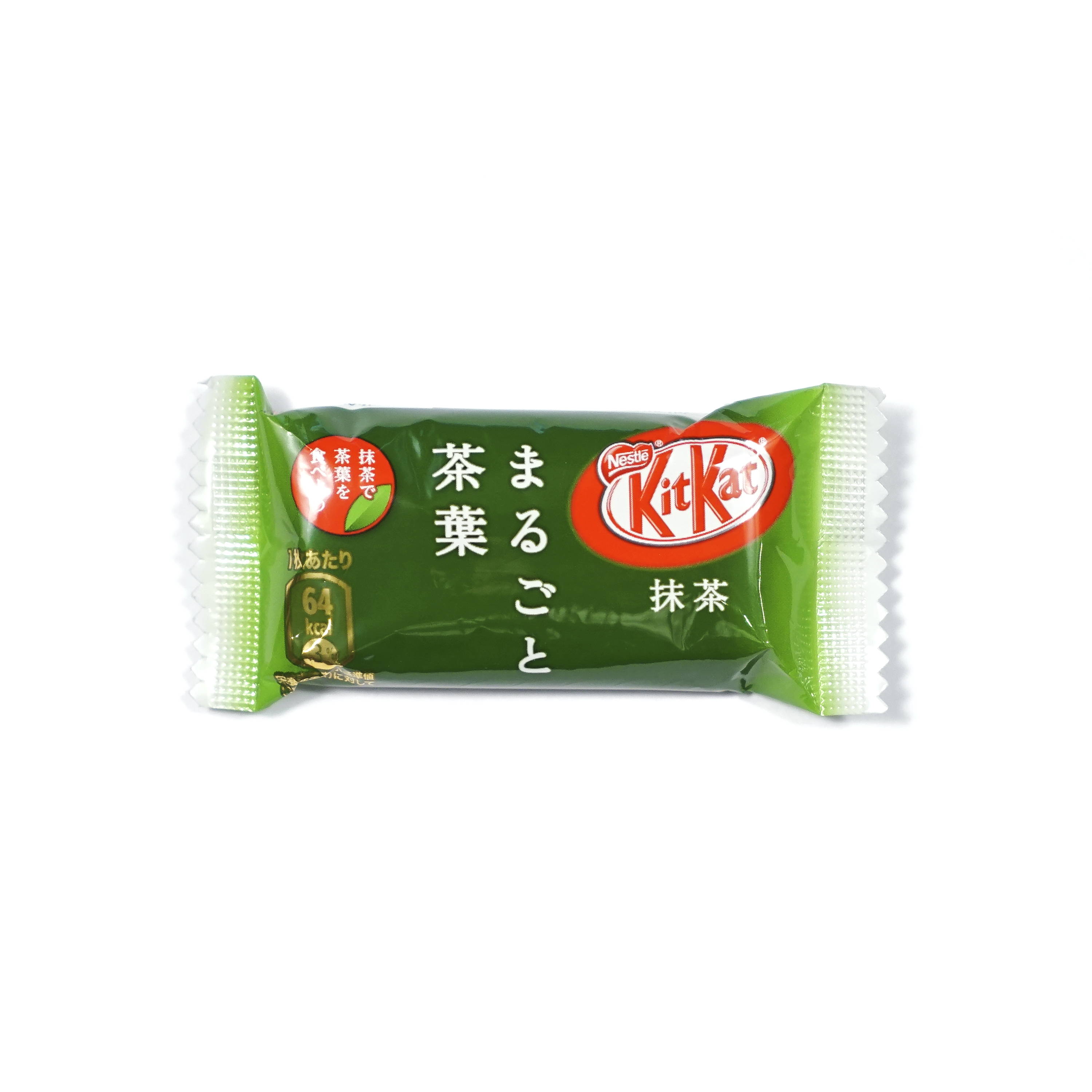 This Kit Kat has ground green tea leaves blended directly into the sweet white chocolate base to give a much richer flavor. 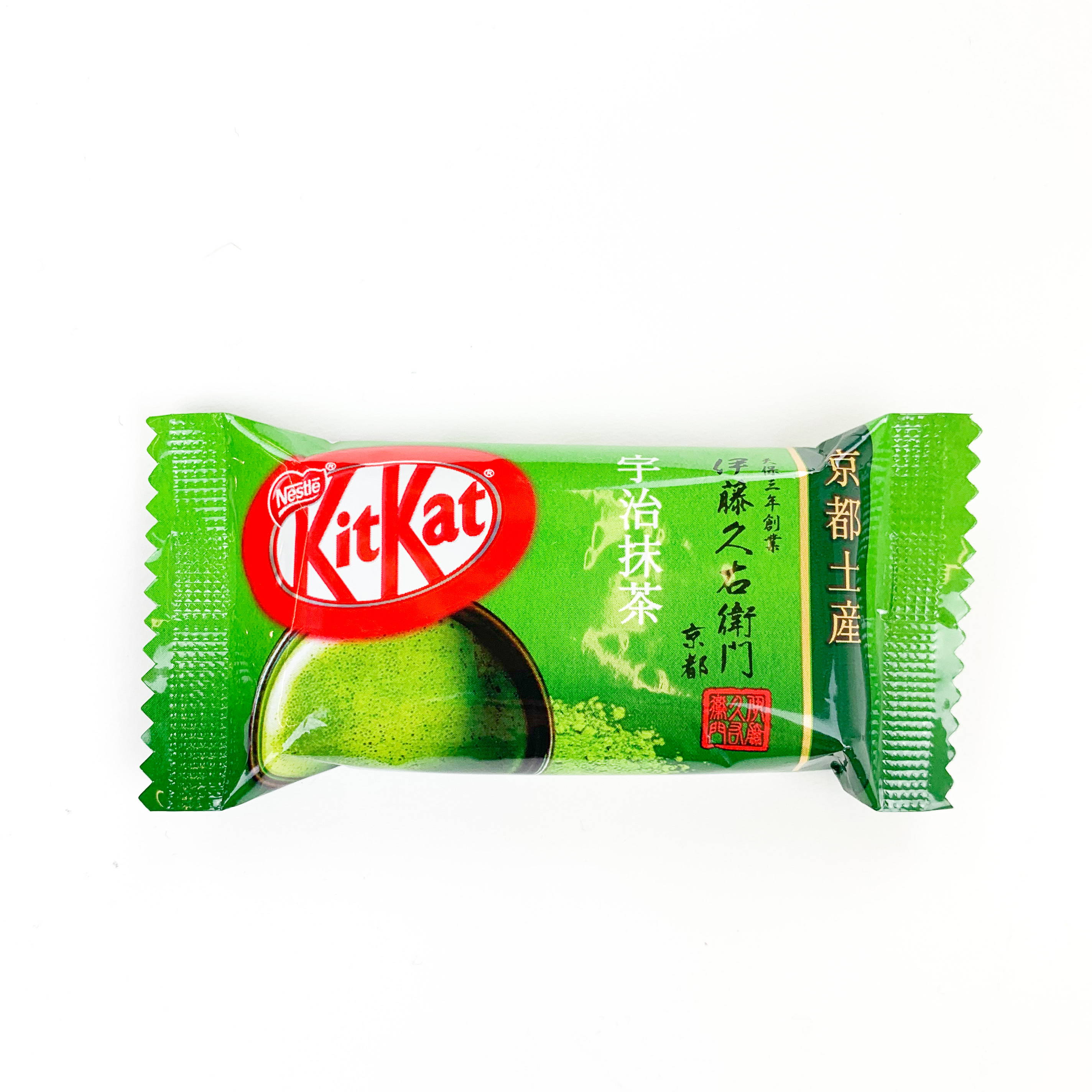 Matcha from Uji Kyoto is known for being top quali-tea. This particular Kit Kat can only be found in Kyoto. I love matcha, and I also love that Nestle Japan has, like, 5 different versions of matcha Kit Kats. I can't get enough! This one has a higher quanitity of tea than some other matcha Kit Kats, giving it quite a rich flavor. It is sweet, but less sugary-sweet and more bittersweet. Definitely one of my favorite matcha Kit Kats ever. 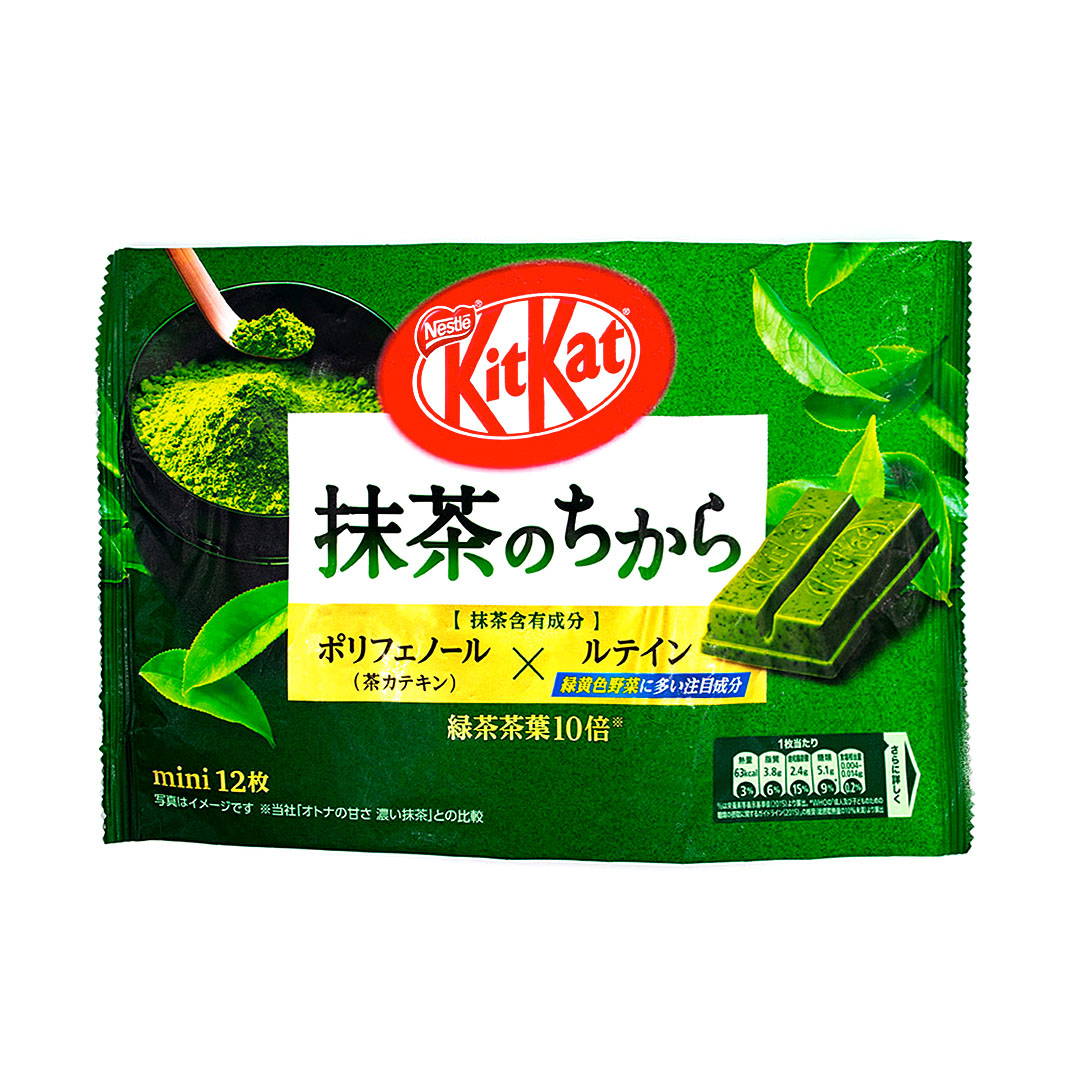 This Kit Kat highlights the powerful and deep flavor of strong matcha without being bitter. Infused with concentrated matcha, this Kit Kat is a darker green than other matcha flavor varieties you may have tried. Within the chocolate are ground green tea leaves to further the flavor and provide the health benefits of green tea, which is why this Kit Kat is called "Matcha no Chikara" or "The Power of Matcha." 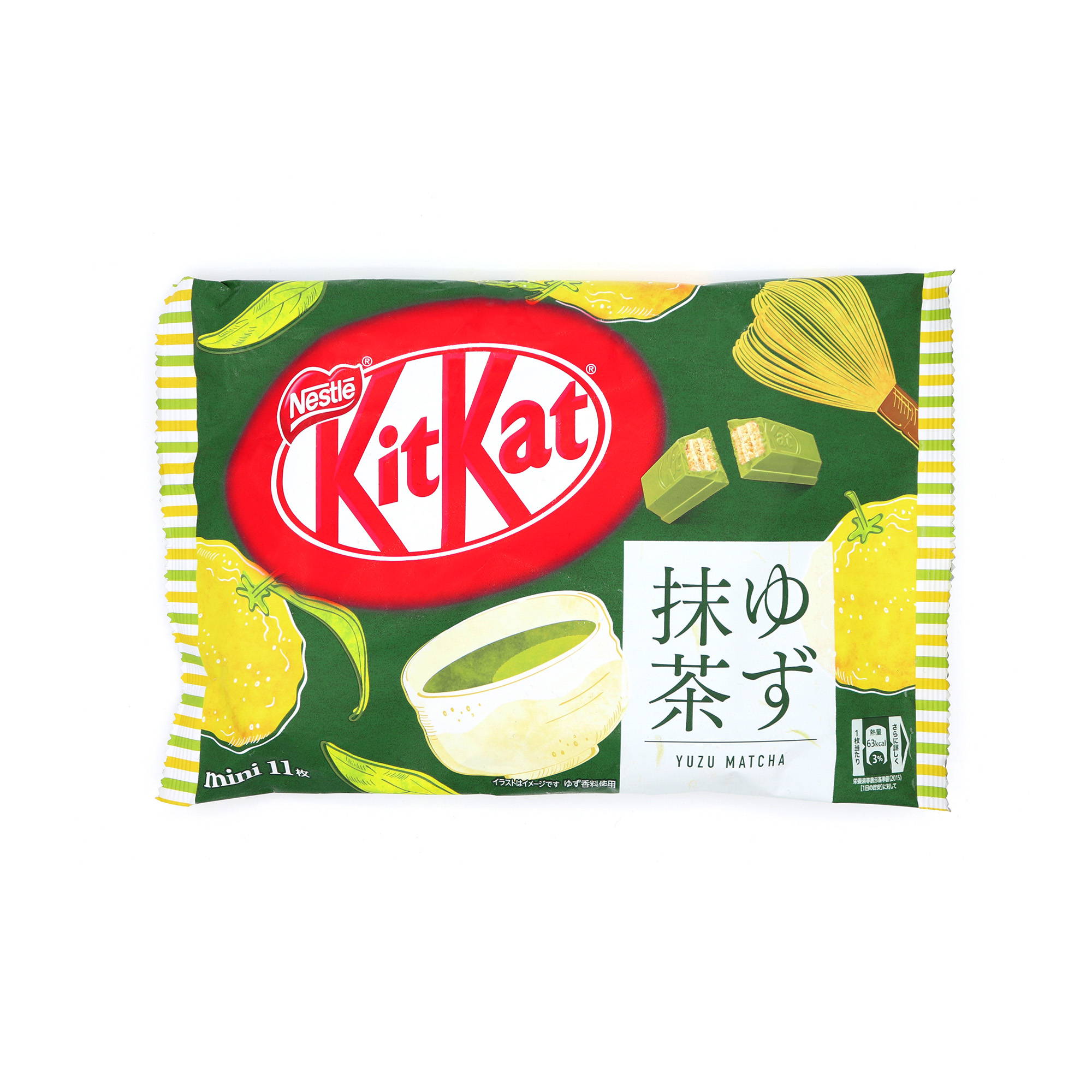 This Kit Kat combines two of our favorite Japanese flavors: Yuzu and Matcha! Fusing the earthiness of matcha with the refreshing citrus notes of Yuzu makes for a flavor we've never experienced before!

Does eating this many matcha Kit Kats count as antioxidants? I think it should. Anyway, you can find these and many other Japanese Kit Kats on our Market right here. Happy Snacking!